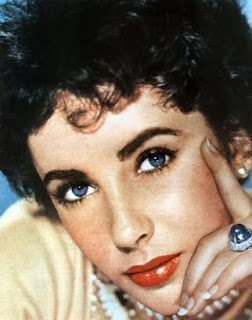 Almost two years after my last blog, I'm inclined to write about yet another LEGEND who passed away, a legend not just of Hollywood, but of Humankind. The morning of March 23, 2011 in Los Angeles, California, saw the setting of a beloved superstar: Elizabeth Taylor, who will be remembered more for her beautiful face, than for the number of husbands she accrued in one lifetime. She was the face that launched a thousand, no, million ships or more.

Ever since I saw The Elephant Walk, my first Hollywood movie as a child, I was taken up with the beautiful face and the amethyst eyes—a face that defined the word "beauty". Her overwhelmingly beautiful face continued to haunt me as I watched National Velvet, A Place in the Sun, and Cleopatra! Her beauty saw me through her transitional roles as Martha in Who's Afraid of Virginia Woolf? and through her tragically unrecognizable face at one of the Oscar events in the recent past years. Her renowned beauty was what bolstered her dignity and warmed people's hearts. She is certainly a legend who will never be forgotten, as the world remembers her kindly beyond just being a Hollywood star. Her persona rises far above that worldly universe.
Posted by Pushpa at 10:58 AM No comments:

PASSING OF A LEGEND

I was saddened by the passing away of James Houston on April 16, 2009. I came upon the news quite accidently, when I was looking up the Santa Cruz Poetry website. I was quite shocked and then very, very disturbed.

I saw James Houston at the Book Club Convention in 2008 at the San José Convention Center. He looked very thin and not too well. He was gracious as always, and very charming. But he definitely looked sick, I thought, as if he was just recuperating from a prolonged illness. Little did I know I wasn’t far from the truth. I came to know from reading his obituary that he was being treated for lymphoma. His father died of intestinal cancer.

At the Convention Center in October 2008, I had a conversation with the novelist, and mentioned to him how much I enjoyed his reading at the Dinner at the Steinbeck Museum in Salinas, following the Salinas Writer’s Convention in 2006. He read the piece from the prologue of Californians: Searching for the Golden State about his father and the tattoo he had on his forearm--a purple anchor with a rope wrapped around its stem and an eagle atop the crosspiece. I remember how moved I was hearing him read in his strong yet gentle voice and demeanor—a true gentleman. I am embarrassed I haven’t read his books yet, although I do have an autographed copy of the Snow Mountain Passage and his recent Where Light Takes Its Color From the Sea. In fact, I even bought a copy of Farewell to Manzanar for him to sign, since I hadn’t been able to find the copy already signed by his wife, Jeanne Wakatsuki.

I met Jeanne Wakatsuki Houston before I met her author husband. Jeanne was promoting her book The Legend of the Fire Horse Woman at the Almaden public library. She was surprised to see my copy of Farewell to Manzanar, because it was one from the original printing of the book. Although the copy was a little used and yellowish, I had hoped to have James Houston sign the same book. Sadly, that will no longer be possible.

Jeanne mentioned at the reading that she and Jim Houston were both students of Journalism at San José State University, and he was a great help to her. They were married a year later. James Houston showed her a great deal of consideration and sensitivity when she decided to write about growing up in the encampment at Manzanar. He helped her through her difficult times when she felt depressed remembering her experience at the Japanese internment camp right here in California. With Jim’s help she was able to unburden her memories and eventually, they collaborated successfully on their best seller Farewell to Manzanar, which later was translated in several languages throughout the world. Both, husband and wife were able to piece together and throw light on a hitherto unknown and embarrassing occurrence in WW II. For Jeanne, this was a triumphant experience getting her past on paper, and she would never have been able to do this without Jim Houston. I remember thinking about their deep rooted relationship and how incredibly rewarding an experience they must have to share their love of writing, and then collaborate on what has become one of the most cherished books about an unforgettable fragment of US History.

James Houston, an important contributor to California Literature and well-respected author in the entire country, carried with him a large piece of San José and Santa Cruz in his heart. His passing away is a great loss to American Literature. His books are now on my to-read list. But I will always treasure my brief meeting with James Houston, not just once, but on three memorable occasions.
Posted by Pushpa at 1:14 AM No comments:

phase to phase with graphique

Pushpa
I have several interests: art, poetry, food, and books. Creating a blog to write about each of my interests seemed to me the best solution. I can now dedicate one day to each of these specific interests, and be writing every day without waiting for the muse. For me it is inspiring to move from phase to phase, as if I were choosing an hors d’oeuvre from a delightful smorgasbord. This way, I'm always looking forward to the next byte.